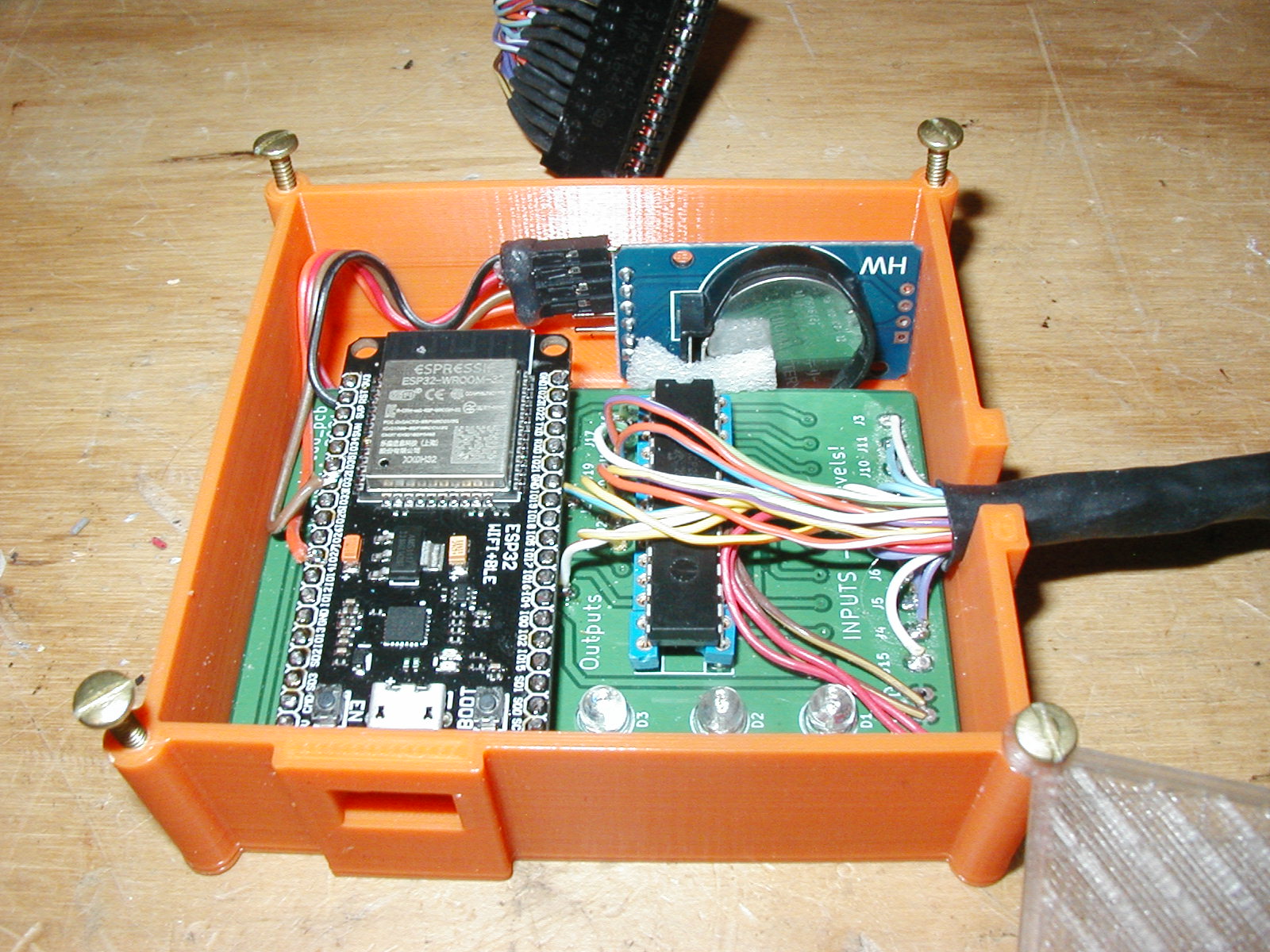 This project implements a multiple 8MB disk system for CPM interfaced through a parallel port on an IMSAI MIO card. The device also includes a real time clock module that provides CPM with access to time and date. The project was conceived when I received a box of S100 cards but nothing that could support mass storage. It is not a fast I/O system, the data throughput is probably close to a floppy disk system, without the wait times for disk seeks. (I do miss the noises a floppy system makes!) The system has been exercised with quite a lot of code development on the Z80 system including compiling basic from sources, morse code practice programs, memory test programs and various editors and other system utilities. The configuration I am using now has 2 8Mb disk images stored on a micro SD card that contains a non banked version of CPM3 and just about every compiler, editor, utility and game I could find on the internet CPM archives. The system is powered from 5 volts available on the parallel port edge connector of the Imsai MIO card. 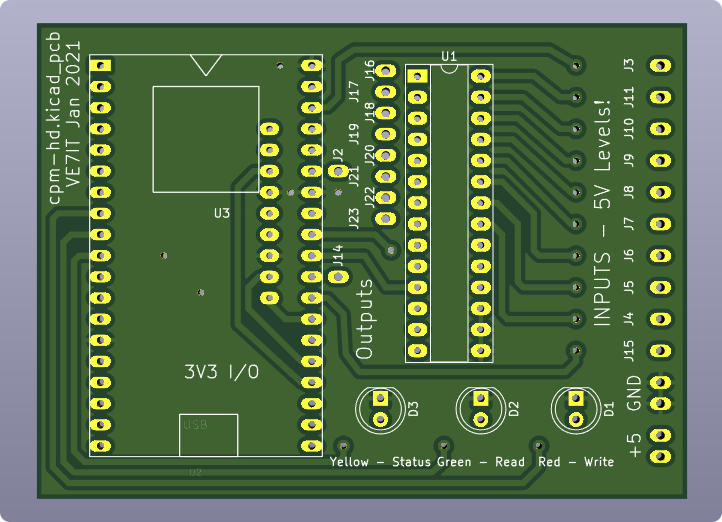 This is a complicated project. To get it working, an understanding of: Kicad PCB design and PCB production, parallel port interfacing, Arduino IDE projects for the ESP32, micro SD card interfacing, the CPM3 boot process (eprom, to boot loader to bios and disk configuration). In all, it took about 4 months of time, reverse engineering S100 bus hardware, debugging hardware, writing code, and figuring out the low level systems of CPM3. Since it was completed, it has operated without any known file corruptions or SD card card file system errors.


The system uses a bidirectional 8 bit parallel port (two 8212 ICs on the Imsai MIO) to talk through a cable to the ESP32 card which has an SD card slot, several status LEDs and an DS3231 RTC clock chip. The interface protocol is a very simple challenge, response model with 5 commands.

As far as the ESP32 is concerned, each HD image is a fixed size binary file on the micro SD card FAT file system. When the CPM system wants to write or read a sector, the file for the requested drive image is opened, a seek to the sector offset is performed and 512 bytes of data is read or written and the file is closed. The data transfers over the parallel port are checksumed and also have timeouts that prevent system hangs. The USB port on the ESP32 is used for programming the firmware and also as a serial port with debug information displayed during operation. During normal use, nothing is connected to the USB port. The ESP32 code is written in the Arduino IDE version of C/C++, while the rest of the interface code on the CPM side is written in 8080 or Z80 assembler. In the current ESP32 software, if there is any problem with communications or file access, the ESP32 flashes the yellow status led and inhibits any more transactions until power cycled (this has only been observed during testing where various problems were simulated). 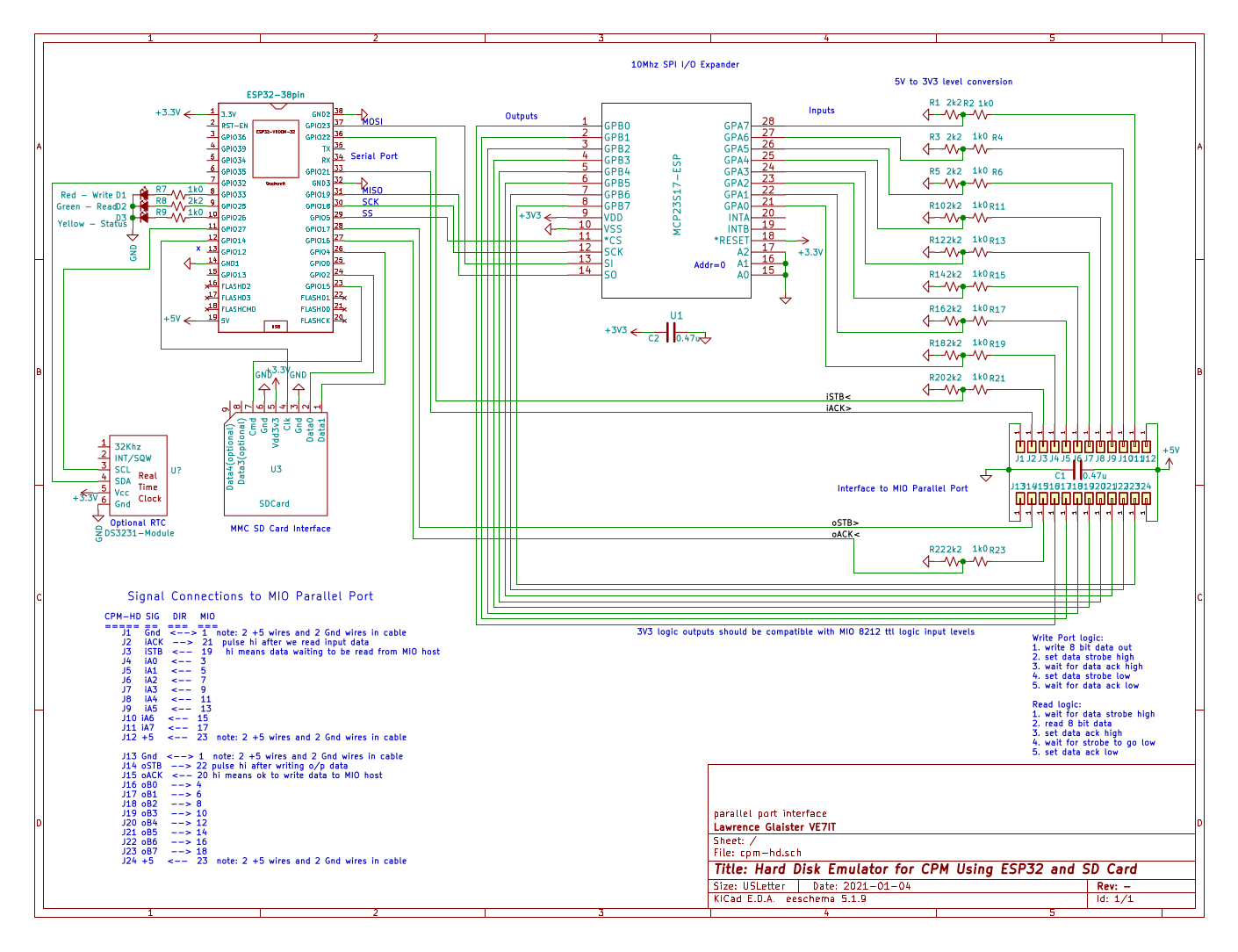 One unique idea I found on the internet was using a micro sd to sd card adapter as an interface between the micro SD card and the ESP32. The adapters come with just about every micro SD card and can be put to use as I did in this project. By soldering a few wires onto the adapter and hooking up to certain ESP32 pins, one has a cheap SD_MMC to micro SD adapter. Using the SD_MMC interface is faster than using SPI, and is fully supported in either 1 bit or 4 bit data paths. There was very little speed difference between the 4 bit and 1 bit interface, so I elected to use the one bit interface to save on wiring and ESP32 pins.


There were several steps needed to bring this solid state hard drive online. Building the hardware was the easy part. Configuring the MIO parallel port took some time to get the status pins and strobes figured out. Routines ( read byte, write byte, and a loop back test) were written into the eprom system monitor to help with the hardware interfacing. Writing the ESP32 program was a little easier as it was all done in C/C++ and was quickly downloadable into the ESP32 flash memory. The next part of the process is getting a CPM bootloader written and getting the sector in/out routines into the CPM Bios sources. This development work was done on a linux PC using the SIMH altair Z80 simulator. It is pretty exciting to see the LEDs flash when one hits the 'B' (Boot) command in the monitor and watch as sectors are loaded into memory and executed and the CPM prompt flashes up on the screen. If you already have a cpm system booting from floppy, adding the disk configuration and the sector read and write routines into your bios should not remove too much hair.


This section has some details on the disk image format used. The linux utilities package "cpmtools" was used for reading and writing the CPM file format images on the linux machine. The HD format used is 256 tracks of 64 sectors of 512 bytes/sector ( a total of 256*64*512 = 8,388,608 bytes ). I used a small shell file to collect info to be placed on the hard drive images (see Build_PP-imgs.sh below). Cpmtools requires a definition of the harddrive format I call s100ide. It is defined in the file diskdefs included below.

I initially configured my CPM system to support 4 hard disk images, but later reduced that to 2 as this saves some ram for directory and sector buffers and gives a larger TPA. The SD card can have hundreds of hard disk images, but the ESP32 program only serves up the 4 images called "/cpm-A.dsk","/cpm-B.dsk","/cpm-C.dsk","/cpm-D.dsk". I used a non banked version of CPM3 as I liked some of the updated features. I believe this hardware should work with CPM 2.2 as well, but I am not sure what changes may be needed in the sector read/write functions. There may be some issues with 128 byte vs 512 byte sectors.